Even before President Burgers of the Zuid-Afrikaansche Republiek had his “staatsponden” minted in 1874, the Volksraad of the Free State on occasion considered the possibility of metallic coins, but each time decided against it. Otto Nolte & Co, die-cutters of Berlin, took the initiative and, in 1887, submitted quotations to the Free State for a proposed coin series consisting of a crown (5 shillings), half-crown, a fifth-crown (1 shilling), a tenth crown (sixpence), a copper penny, a half-penny and a quarter penny or farthing. Six of these pattern coins were sent to the government for consideration.The crown, considered as a possible coin, was minted in silver and lead. It bears the date 1887. There was also a variation – very scarce and rare pattern coin by now – with a counter stamp “B.E.A.C. 1888” (standing for British East African Company) below the word “KROON” The firm must have obtained some of these crowns and then placed their own stamp on them. It may have been used as a souvenir or commemorative coin. There are several variations of the penny.

The 1874 “EEN PENNY” bears an orange tree on the reverse as well as two powder-horns. Of this penny there is a variant of twice the normal thickness. A very rare variant of this penny is one bearing a coat of arms, similar to the 1888 piece.The 1888 penny was minted in bronze, nickel, aluminium and silver, with noticeable variations of thickness. There is also a “2 PENCE” mule or bastard coin: the obverse bearing the Z.A.R. motto “EENDRACHT MAAKT MAGT” (unity is strength), does not accord with the reverse, which bears the Free Sate coat of arms. As far as is known, this is the only coin of its type. The piece has an interesting history. A soldier, so the story goes, took the coin to Australia after the Anglo-Boer War. There it fell into the possession of a merchant who sent it to London, from where it found its way back to South Africa.Unfortunately none of the specimens submitted by Nolte were ever minted. (Today, only examples of the crown and penny are known and are sought after and very expensive numismatic items. Perhaps others will turn up one day as the numismatic rarities of the century!) 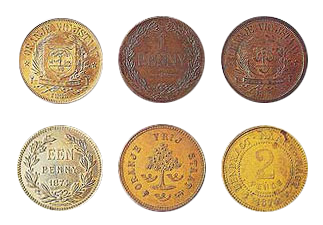 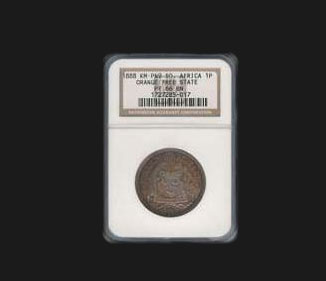